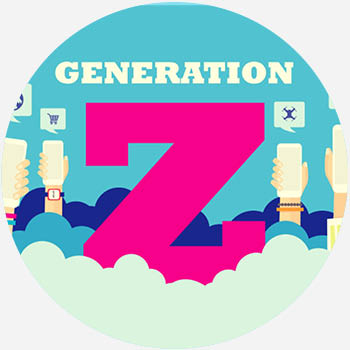 Meet Generation Z: Do you have a Recruitment Strategy for them?

Each generation that is born, is becoming more and more different. And defining this is important. Why? Because it tells us how we are growing and evolving, as well as predicting what might come next. New paradigms mean new strategies and with millennials as the globalization era, generation Z is the digital era. They have probably never gone into a bank (all their banking is online) and they are always wired to a phone, tablet, iPad… the list goes on. And let’s not forgot their currency is social media.

Who is Generation Z?

Generation Z is roughly people who were born between 1996 to 2010. This age group is ranged between 8 to 24 years, which means they are already in various workforce industries. Which is why companies need to start thinking about their strategy for recruiting this generation – they have probably learnt to swipe before they can speak…

So let’s go through some of the characteristics that Gen Z has:

Generation Z and Social Media as their Currency

Millennials were the ones that saw the birth of social media – however generation Z are the ones who came out of the womb using it. Statistics show that:

While a few millennials used LinkedIn, statistics show how hardly any of Gen Z use the platform.

Why is recruiting Gen Z Different?

Recruitment generally speaking, is a combination of marketing and sales. You want to attract candidates and convert them into successful hires. When finding the right candidate, you look for the most relevant skill set.

Millennials go straight to job boards such as Indeed & CV library – and use email a form of communication. This makes it easy for companies to post on job boards and then follow up with emails to get the candidates attention.  But… things are starting to change now. It shows that generation Z have an even lower attention span and they prefer visual mediums, rather than text driven content. They like to shift from platform to platform – the newer for them, the better!

Generation Z love for content to be right in front of them, which is why they like in-app notifications, push notifications and social media over email. They are mobile only people.

What changes can we make in Traditional Recruitment for Generation Z?

Recruitment is very traditional – they rely on email, job boards and telephoning people. So how can we up our game? Here are a few strategies we could be using to recruit Gen Z:

Now that we have observed how generation Z use social media and technology, we can see how different they are… even from the generation just before! They look at the world differently, and that’s because they can see the world from just a touch of a button. So get those visuals in place because with generation Z, if they can’t see you, they won’t use you.